New ‘cities’ are set to be on the blueprint cards for South Africa, and they might just be the ‘smartest’ of all our developments.
The primary goal behind building ‘smart cities’ is connected to President Ramaphosa’s rhetoric that a South African city can be driven by technological advances.
This umbrella objective was addressed at the State of the Nation Address (SONA) which took place earlier in February. The project holds sub-objectives revealing notes of what the president hopes will be a post-Apartheid space free of the oppressive era’s spatial planning.
The project aims to provide a space for up to 500 000 people for one smart city as Ramaphosa indicated, using the conceptual Lanseria smart city along the border of the North West and Gauteng.
Why the determined turn toward technology-driven cities? Considering South Africa’s relationships with tech-dominant countries like China, the influence on wanting to rapidly advance our planning and development to technical notes becomes unsurprising. Back in 2014, Chinese development group Zendai Developments announced its desire to build the first ‘smart city’ in Modderfontein – packaged as a space that would rival cities like Sandton and dubbed the Chinese developers’ ‘Manhattan in Africa’ as The Guardian reminds. However, it did not come to fruition and was documented in a paper titled ‘Failed Fantasies’ by UCL research fellow Frances Brill and University of Dublin’s Ricardo Reboredo.
Last year in August at the fourth annual African Smart Cities Summit, things started to look up for the developments.
Where will the smart cities be?
The ‘Failed Fantasies’ are back on the map. Provincial governments are working on at least three of these city-type projects, and developments appear to be focused on the Eastern Cape (African Coastal Smart City), the North West and Gauteng border (Lanseria smart city) and Pretoria’s Mooikloof (Mooikloog Mega City). Nkosi City along the border of the Kruger National Park is also set to be part of the blueprint.
According to City Press, the project will look at over R8 billion for the project and developments could begin in June already for the Mpumalanga (Nkosi City) development.
The project is presented to take an agri-city format coupled with urban design and RDP houses. Job creation in the agricultural sector has been outlined, with a focus on women and the youth.
Where does the tech come in? According to the Mpumalanga government, the technology comes in the form of solar technologies and renewable energy plants.
The movement away from apartheid’s spatial planning seems to be an admirable feat, but it also gives rise to the question: what is the government doing about tackling the current city-related problems in our once Apartheid spatially-planned areas?
Photographer Johnny Miller’s inequality in a photograph for Time Magazine’s cover comes immediately to mind, writes Cape {town} Etc’s Ashleigh Nefdt. 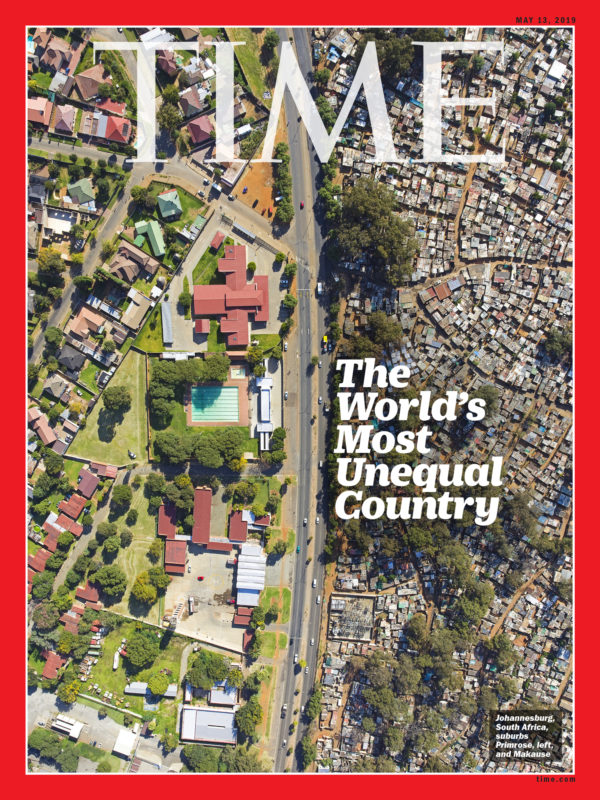 The cover showcases Johannesburg via a drone. It shocked the world, but to most South Africans, it was just a different angle of something we see daily.
In Cape Town especially, we see the impacts of spatial planning every day. One needs only to compare the short distance from Constantia to Steenberg. In the Mother City, apartheid’s spatial planning ghost still looms. 2017’s Reclaim the City campaign that sought to draw attention to the matter was a hallmark year in how years of post-independence had changed little in this regard.
So, as the public, we turn to the government with watchful eyes. Of course, a ‘smart city’ sounds interesting, but whether the R8 billion might have been used toward other plights, like rebuilding areas still impacted by the spatial planning ‘ghosts’ of our past, might be food for thought, in my opinion. Where the billions are worth is of course, a matter of the coin thrower’s interest.
Also read:
Boys wearing school skirts in Cape Town adds to the ‘male dress’ becoming a norm